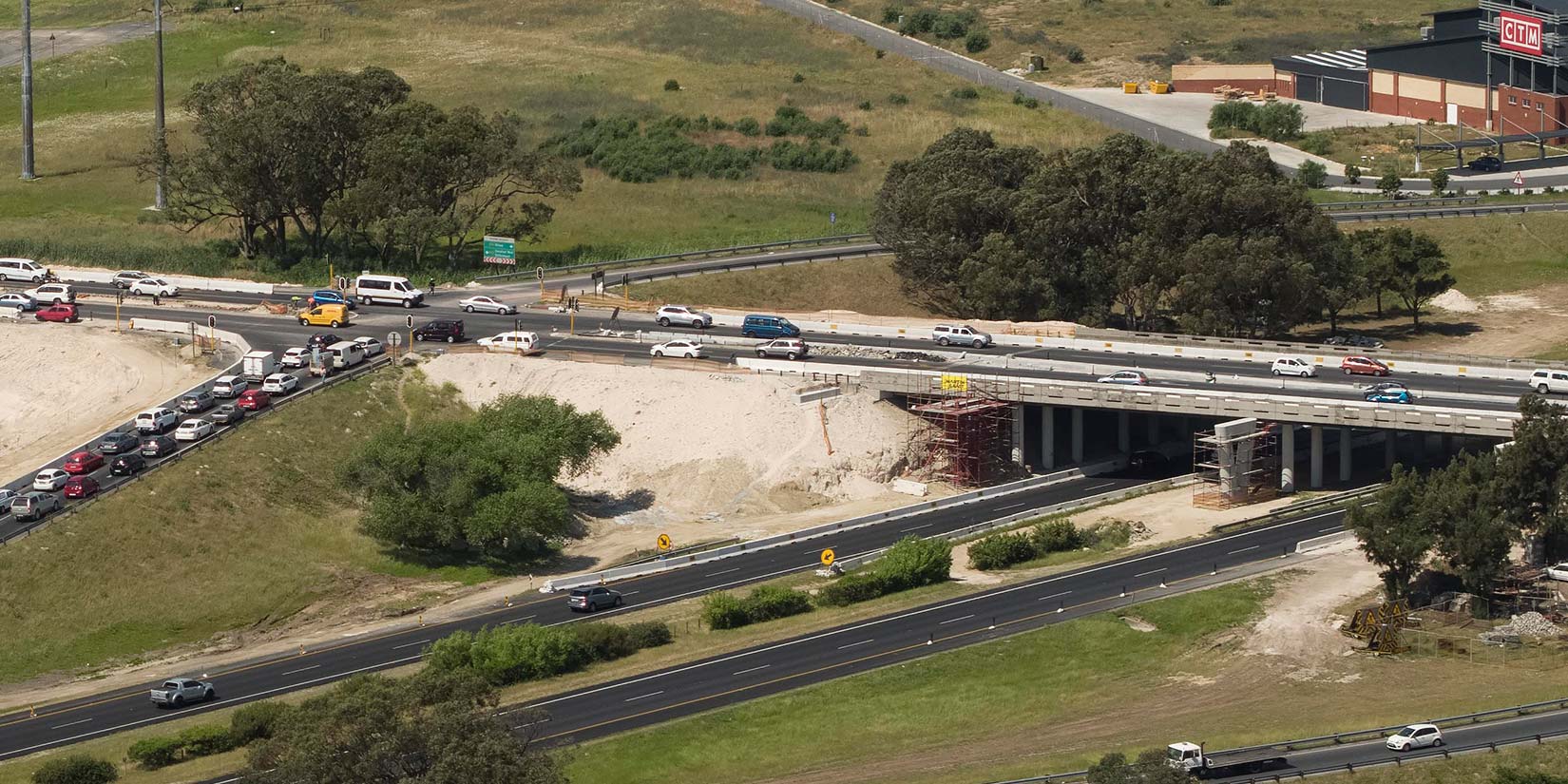 Work proceeds on the Broadway Boulevard Upgrading, an initiative co-funded by the City of Cape Town and the South African National Roads Agency Limited. Works include the construction of two new 70m long pedestrian bridges over the National Road 2, carrying a 3,5 metre non-motorised transport lane in either direction. The substructure for the bridge is nearing completion, and shortly thereafter precast beams and infill slabs which comprise the deck will be launched into position. The works have been designed by HHO, and are currently being constructed by Martin and East PTY LTD. 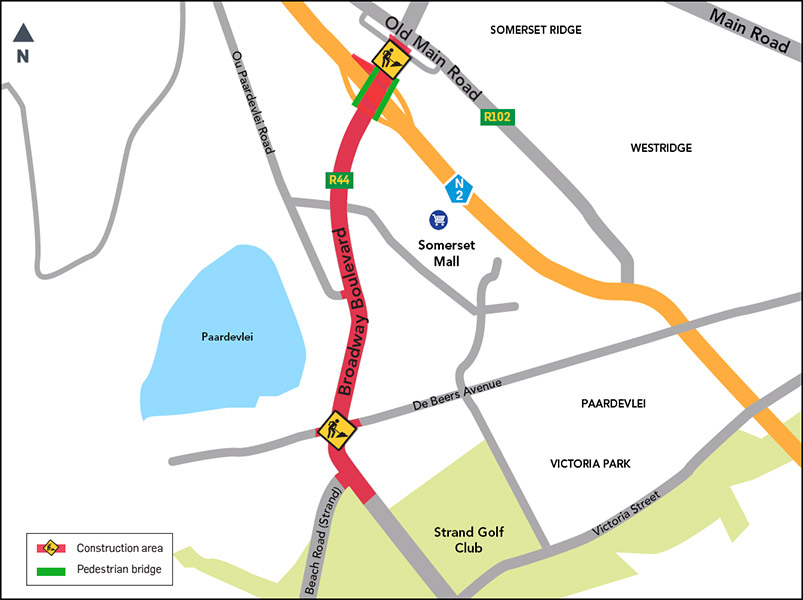 The City of Cape Town has commenced with the upgrade and widening of Broadway Boulevard in Somerset West. The construction work will stretch from Beach Road through to de Beers (R44/N2) Interchange. This R117m project with an 18 months contractual period was anticipated to be completed by the 03rd August 2020. The project is currently delayed due to the President’s announcement of a nationwide lockdown from midnight on Thursday 26 March 2020 in terms of the Disaster Management Act in order to combat the Covid-19 pandemic.

The construction industry is not currently classified as an essential service, and is therefore not exempted from this nationwide lockdown. All key role-players are unable to perform in order to provide services in accordance with this Contract during this period and are not able to move from their homes.

The roadworks was be implemented in a phased approach in order to minimise disruption to the traffic flow and to keep congestion as low as possible. Once completed, the upgrades will bring much-needed relief from the heavy traffic congestion currently experienced in this area.

This project is a partnership between the City, Paardevlei Properties and the South African National Roads Agency (SANRAL) and includes:

Additional Lanes
An additional lane, in both directions, has been constructed on Broadway Boulevard from Beach Road to the De Beers (R44/N2) interchange. Works were undertaken to relocate existing services and also to modify existing stormwater infrastructure in order to accommodate the various new lane widenings.

Pedestrian and Cycle Facilities
Currently underway is the completion of a 2m wide sidewalk and two 2.5m wide bridges for pedestrians and cyclists over the N2 overpass. Construction of these bridges required the temporary closure of the N2 over a specific weekend, however, traffic was diverted via the off and on ramps. At the moment we are completing the installation of steel bridge handrails, this will be followed by asphalt surfacing and bridge expansion joints.

New Street Lighting
The existing street lighting is currently being upgraded to and additional lighting will be added along the corridor. The existing lampposts are re-used and fitted with LED lamps. The streetlights in the median were first upgraded and thereafter the street lighting along the left hand side of the roadway.  This allows adequate lighting for road users at night.

Stormwater Infrastructure
The works include the construction, modification and extension of existing stormwater infrastructure.

Intersection Upgrades
The intersections and traffic signals at Beach Road, De Beers Avenue, Old Paardevlei Road and the N2 onand off-ramps are being upgraded. The intersection upgrades take place at night and over a few weekends to minimise the negative impact on traffic.

Traffic Accommodation
Broadway Boulevard carries significant volumes of traffic and therefore the current number of lanes will remain operational during the construction period although traffic will be redirected. The road surface will be milled down resulting in uneven road surface while the construction is underway.

Water Supply
Maintenance to the existing bulk water mains will be carried out during this time which may result in some areas experiencing low water pressure. Every effort will be made to avoid water outages.

The rehabilitation of all existing carriageway pavement layers with addition of cement to meet a C4 pavement criteria has been completed on Broadway Boulevard from Beach Road to the De Beers (R44/N2) interchange.

Proactive site investigation revealed that the existing pavement layers in the SANRAL road reserve were already cement stabilised, this finding resulted in cost and time saving for completion of the works.

The re-welding and concrete encasement for the Steenbras bulk water main has been completed. The works were undertaken to strengthen the existing pipeline, this due to the new lane widening’s now above the pipeline.

Asphalt works through intersection for Bitumen treated base(BTB) & wearing course surfacing will take place at night in order to minimise the negative impact on traffic flow.

The night work commenced in March 2020 and will resume when the COVID -19 lock-down period ends.

Once the work commences, temporary road closures may be called for due to unforeseen circumstances.